In 2012, online advertising spend breached the US$100 billion level for the first time. And forecasters are predicting double digit increases for the next couple of years.

But the types of ads are extensive, from pop-ups to banner ads, to text ads to display ads and so on. There is no consensus on what works the best and what doesn’t but studies suggest that interstitial ads (those that appear when you move from one page to another) animated ads and pop-up ads have the highest visibility, but have low click-through rates.

Whereas banner ads suffer from what the industry calls “banner blindness.” Which basically means that users have stopped seeing them.

According to one company in Australia, for every 1,000 people who see an online ad, only 1 will click on it and the average conversion rate for most sites is 2% which means that you require 50,000 people to see your online ad before you are likely to make a sale.

But digital advertising will continue to grow especially as advertisers online can target their messages at the right segments, thanks to increasingly sophisticated technology. But with such low penetration, you need to get the content right so that when the 1 in 50,000 comes along, there is a good chance they will buy whatever it is you are selling.

I’ve had a go at Malaysia Airlines a few times and I’m probably not very popular with them which is a shame because I’m a big fan of the brand and in some areas, they are trying very hard to build a global brand. But I don’t believe the airline is demonstrating high levels of branding professionalism. Most recently I had a go at their latest advertising campaign. You can read that story here.

I’m sorry to say that I’m going to have another go at them. Earlier today I clicked on a link at the Malaysian Insider website and was interrupted by an interstitial ad for Malaysia Airlines. The ad (see below) featured an underwater image and an image of Penang. Obviously I was interested to see what they were doing so I clicked on the ad.

I was directed to the Malaysia Airlines site and was told it is under going system maintenance. Now I understand that sites need to be up dated all the time but not in the middle of a digital advertising campaign. 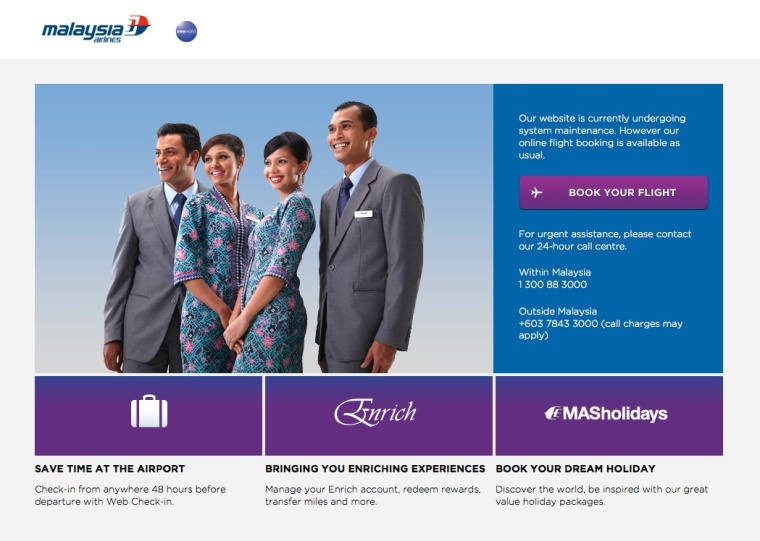 This type of schoolboy error can be fixed with a brand blueprint that is shared throughout the organisation and ensures the organisation works collaboratively, not in silos. Until they make such organisational improvements, Malaysia Airlines will continue to struggle. It really needs to up its branding game if it is serious about becoming profitable.