I opened my LinkedIn this morning and had this message in my inbox. Now my trials and tribulations with BMW are well known to anyone who reads my blog on a regular basis.

But in case you are new and interested, you can read an example of why I detest this brand with a passion here.

Let’s go back to that message in my inbox. This is a relatively new channel for brands, especially here in Malaysia where most business owners think a billboard is the height of marketing sophistication.

So why would you use this channel? Well in theory it allows you to get in front of the right kind of people. Ideally, that is people who are interested in your industry and potentially although not in my case obviously, your actual brand and even a particular product.

The idea is to work with LinkedIn to target users who have shown some interest previously in a similar product or even better are perhaps engaged in related communities.

Best of all would be members who are engaged and want to know about the product. I’m none of these but that didn’t stop BMW messaging me.

Look at that message. What does “Athletically muscular and aesthetically uncompromising” juxtaposed with ‘its full-on racing DNA is visible from the get-go” even mean?

In the era of Mad Men this meant something. Today it shows a complete lack of understanding or appreciation of the customer journey.

Hopefully they are being charged per click because in the course of writing this post, I’ve clicked on the call to action many times.

And once I get to the site, I’m bombarded with even more powerful verbs, adverbs, adjectives and prepositions. Uncompromising power. The Perfect Gentleman. Design. WTF? I guess by now I’m supposed to be frothing at the mouth, desperate for the opportunity to own this beast, which incidentally costs more than RM1,000,000.

But perhaps most galling of all is that when I click on the link, I go to the main BMW site. So I’m being targeted as someone with the potential to spend RM1,000,000 on a car, yet now I’m supposed to mix with the hordes of BMW 1 and 3 series wannabe owners.

There should an exclusive, seamless way for me to engage with the dynamic 8 team waiting for someone like me keen to learn more about the 8 series!

But anyway by now, instead of frothing at the mouth, I’m doing what every potential customer does these days. I’m seeking out the opinions of people that matter to me.

And when it comes to buying a car, my first stop is Top Gear. BMW describes the interior of the 8 as “More irresistible with every detail. The elegant ‘CraftedClarity’ (note the nifty use of capitals and joining together of two words) glass application gives the sporty interior an exquisite appearance…It embellishes the insert of the gear selector…The result is an interplay of sporty flair and exclusive design that combines athleticism and grace like never before.”

Obviously as a jaded consumer who has been let down so many times by brands over promising and under delivering, I need to visit the Top Gear site to get a third party unbiased opinion.

Top Gear describes the interior as, “the new TFT- screen instrument cluster is a mess. There’s a big area in the centre that shows navigation diagrams, which can’t be used for anything else if you know where you’re going.” Hardly ‘CraftedClarity’!

Top Gear goes on, “Alongside is a near-unreadable rev-counter. In compensation you get a tach in the HUD when in sports mode. The new climate controls are a bit fiddlier than BMW’s previous efforts too, and the silver buttons are impossible to read when backlit. And while Apple CarPlay-over-Bluetooth is a convenient idea, it was glitchy in the test cars. That’s a nitpicking paragraph, but more nits than you expect.”

It’s a million Ringgit car! You nit pick away lads!

However, Top Gear isn’t done. They end the interior review with, “…The front seats are a good place to be, poly-adjustable and supportive. The back ones aren’t. They’re horribly cramped, for knees and heads. At least the boot is biggish, and folding the useless back seats extends it some more.”

That’s a long way from, “interplay of sporty flair and exclusive design that combines athleticism and grace like never before.”

The Top Gear verdict is seven out of ten and the very underwhelming, “It’s very competent across the board, but not greatly different from the rest of the BMW range.” Hardly a compelling reason to spend RM1,000,000. And that’s before the astronomical insurance, road tax and running costs.

So how can you make sure your brand doesn’t make the same mistakes? Well here’s a few ideas

1) LinkedIn messaging isn’t a tool for creating awareness. Don’t be lazy and treat it as one.
2) Branding is no longer about transactions. It’s about building relationships. Don’t try and sell anything to anyone at the first attempt.
3) Know your target market. How many people in Malaysia are likely to be able to afford or want a BMW 8 series? No more than a handful. There are better ways to reach out to them.
4) Have an integrated brand strategy based on robust brand, market and customer data to make informed tactical decisions. No more of this ‘spray and pray’ approach.
5) Understand the customer journey before making any tactical decisions.
6) If you are selling an exclusive product, make every step of the experience exclusive.
7) Brands can no longer expect consumers to believe what they say and not seek 3rd party confirmation of the claims. The days of flamboyant corporate driven advertising with ‘power words’ are over. Accept it. Be real and human in your content.
8) For an automotive company, the right way to use LinkedIn messages is to create personalized invites for a test drive or invitation to an exclusive and I mean exclusive, event.
9) Don’t use new tools in old ways.
10) Collect and use customer data.

It is inevitable that you will lose customers although preferably not the way I was lost to BMW.

Have a recovery plan for lost customers, especially those lost in an acrimonious way. But once lost, don’t include those customers in your marketing as it may negate your marketing efforts significantly.

But most important of all, branding today is about building relationships, not selling stuff. Use new tools properly to build relationships. The stuff will then sell itself.

Like the rest of the planet, Malaysian consumers are spending more time online and this has seen a dramatic fall in the circulation of newspapers.

The New Straits Times, the oldest newspaper in Malaysia and once the pride of the industry has been through at least two ‘rebrands’ in the last 10 years but this has failed to stop circulation plummet to 55,000 copies a day in 2015.

Recent reports have put the circulation as low as 35,000 copies a day towards the end of 2016. It’s hard to find current figures which suggests things are not going well.

Back in January 2017 we encountered what may be a global first when we opened a copy of the New Straits Times, and with the exception of a 1/8th of a page ad, didn’t see any significant paid for advertising!

Meanwhile the Star newspaper isn’t fairing quite so badly with a circulation around the 250,000 mark. In the 22nd April 2017 edition there were a number of full page ads and even a double page spread.

These ads were selling everything from grapes to fridges to laptops and detergents and not forgetting the out of place table in the Tesco ad. 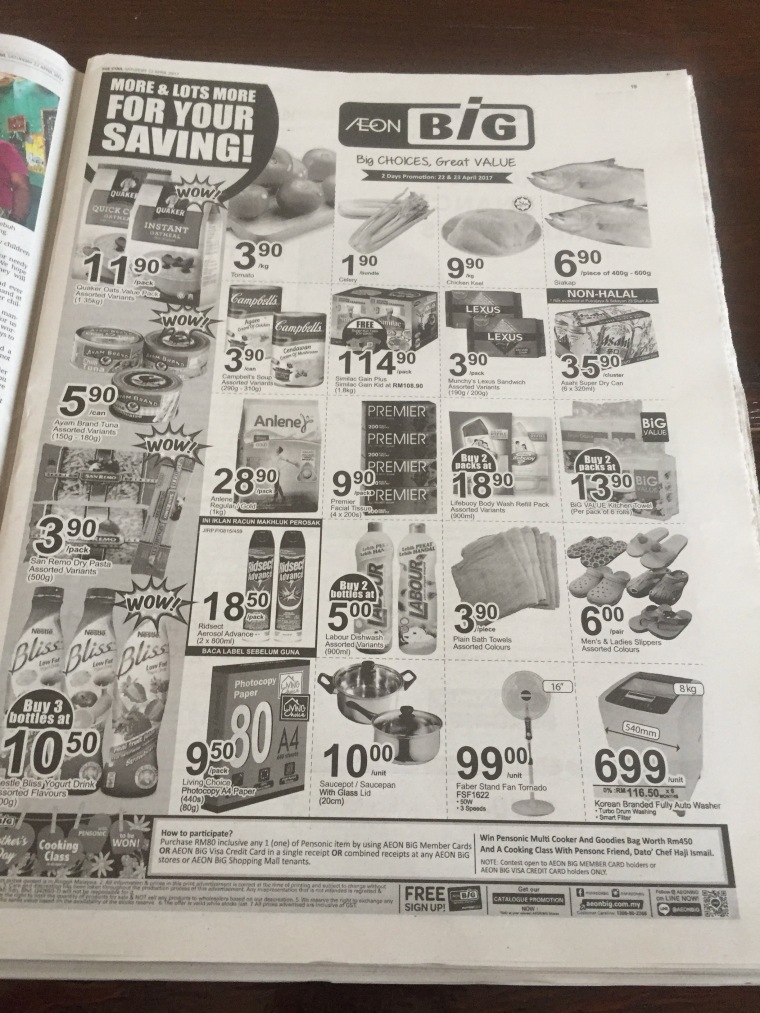 I presume these hypermarkets and discount stores are using these low end, low value products to lure housewives to stores in the hope they will buy higher margin goods once there.

Nothing wrong with that and they’ve been a feature of The Star on Saturday for many years. But if that’s the case, and the readership of The Star on a Saturday largely consists of housewives getting ready to do the weekly shop, why is there an ad for the BMW 7 series in the middle of all these ‘cheap as chips’ ads?

The Malaysian Automotive Association has forecast total vehicle sales in Malaysia will be 615,000 units in 2012, up 2.5% over 2011. If this figure is reached it will be a record for Asia’s largest passenger car market.

Various reasons have been put forward to explain the drop in Q1 including the Lunar New Year and new credit policies. I was under the impression the Lunar New Year was an annual event and always in the first quarter so I don’t know how that would be a problem this year.

Personally, I think the main reason for the Q1 drop is that the global economic situation is having an impact on the number of loans approved by local banks wary of a repeat of the Asian financial crisis of 1998.

Whatever the reasons, it is good to see that BMW is doing what it can to sell its new six series with an extensive digital campaign.

I clicked on the link and was pleased to learn that the Bavarian giant will be offering wheels with the new 4 door coupe.

This should help increase sales for 2012.