About 300 kilometers south of Bangkok on the gulf of Thailand, lies Hua Hin once a quaint fishing village that was transformed in the reign of King Rama VI when it became a stop on the Southern Railroad route.

In the reign of King Rama VII a Summer Palace was constructed for the royal family. Despite the many political and social changes that Siam experienced during this period, the Palace gave the Royal Family and their friends an escape from court life and 100 years later, Hua Hin is still a popular destination for high-society and the Royal Family still resides at the Palace for part of the year. 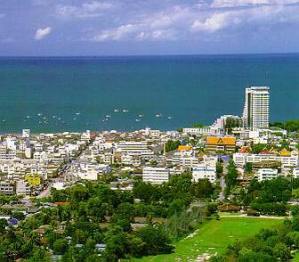 Hua Hin is also a popular location with five star resort hotels, luxury boutique residences and private beach front homes offering unprecedented levels of luxury. In Hua Hin alone, there are roughly 200 hotels, including 30 five star hotels in an area no more than a few square miles. Hua Hin has struggled for years to attract tourists and fill rooms. Throw in a global economic meltdown, the on-going domestic political crisis and civil unrest and the business of building a hospitality brand gets rather complicated, even in a country with such a reputation for fun.

And with Asia’s hospitality business looking good in these troubled times – over US$1.3 billion was invested in hotels in Asia Pacific in the first six months of 2010 – destinations such as Hua Hin have to be innovative to compete. And to do this, the town and tourism related businesses must work together, not compete, to ride out the storm.

Intercontinental Hua Hin Resort has come up with one creative idea to differentiate itself by offering a private air service to shuttle guests from Bangkok’s Suvarnabhumi International Airport or Don Muang Airport to the beachside city. For anyone who has had the misfortune to experience the drive from Bangkok to Hua Hin, this is certainly an attractive offer! But it won’t be enough to raise Hua Hin’s profile, increase interest and ultimately drive traffic to the resorts that will allow room rates to rise and profits increase.

Intercontinental needs to work with other products within Hua Hin to offer a complete experience to guests taking advantage of this service. A personal discussion with those using the service will allow the hotel to get to know their interests and allow the sales person to offer suggestions, not from a worn brochure at the service desk in the lobby, but in the comfort of a pre flight lounge or even in flight.

Other hotels are offering free days or more traditional tactics such as large discounts. Whilst these may increase sales in the short term, they will do little to build profitable brands. These hotels need to innovate in the same way as the Intercon, to work with other destination stakeholders to ensure Hua doesn’t become a quaint fishing village for the next 100 years.