A fellow branding professional who I respect a lot sent me this link to an article on Forbes.

It’s a fascinating story on a number of levels. General Motors (GM) has been very supportive of Facebook, spending in the region of US$40 million per year on marketing with the site, US$10 million of which was on paid advertising. However, the article says that GM will no longer spend the US$10 million on marketing but it remains heavily committed to using the site to engage consumers.

Advertisers such as GM have been key to driving up FB user revenue which is about US$9.51 per user in the U.S, compared to US$4.86 in Europe US$1.79 in Asia. Total revenue from advertising in 1Q2012 was about US$870 million so the US$10 million annual spend from GM will hardly register.

For the record, GM is one of the top three U.S. advertisers and according to adage, the firm spent US$2.8billion domestically and US$3.9billion globally on advertising in 2010.

The first time I read the story, I thought it reflected badly on FB but then I read it again and believe reflects well on Facebook but reflects badly on advertising.

The channel (FB) is alright and the content is working but the medium (advertising) is ignored by Facebook users and this is something we’ve actually known for a long time – consumers are rejecting traditional forms of advertising. What we didn’t know was that they are also doing this online.

But as Facebook goes to IPO, it does make one wonder how it can monotise those 900 million users. Having said that, I also read that Ford is ramping up it’s Facebook advertising.

On another note, I noticed this digital ad 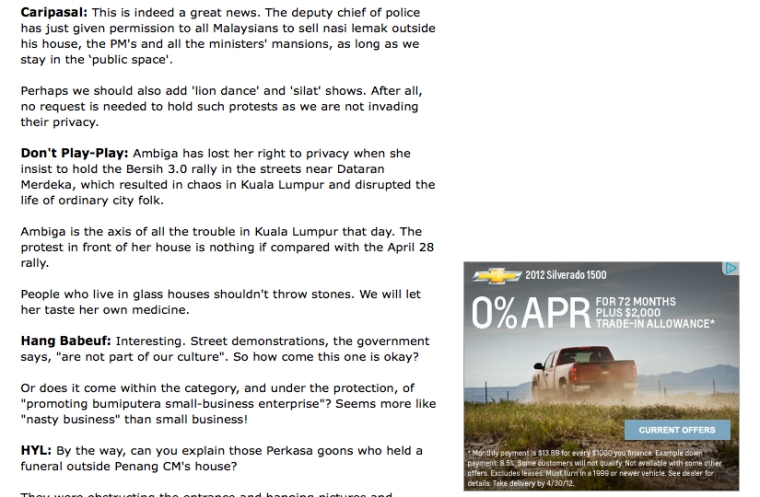 for a GM brand on a Malaysian news site! Note that it is for making purchases in the USA. Not much good to us in Malaysia! Perhaps the issue isn’t FB, it’s the targetting!